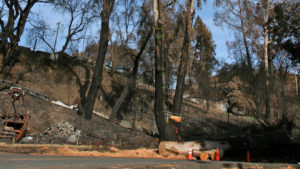 When wildfires roll through, the devastation is often immense. While attention is usually focused on the impact to structures — sometimes homes are burned right down to their foundations — part of the rebuilding process requires an evaluation of the surrounding trees. In most cases, a decision can be made relatively quickly about whether a building is a total loss and must be replaced, or whether the existing structure can be brought back to life. It’s a simple equation of which approach makes the most financial sense. But as living organisms, trees can be trickier to evaluate once the smoke clears.

Each species of tree, fire event and property is different, so there is no universal rule to follow, explains Steven Swain, environmental horticulture advisor with the Cooperative Extension of Marin County in California. With the numerous wildfires California has endured in recent years, Swain has had plenty of opportunity to evaluate trees after fires have passed through, and to monitor their conditions in subsequent months and years.

“In broad terms, conifers generally die after a fire, and broadleaved trees typically resprout from their root systems, at least here in the West,” Swain says. He offers the caveat that these are general rules, and each tree species and fire event is a little different. Redwood, for example, is a conifer that resprouts. “And it has very thick bark, so even if a redwood is completely charred and loses all of its leaves, there’s a decent chance that it will pull through and survive,” Swain says. “Whereas if you’re dealing with a pine or a fir, if there isn’t a speck of green left on that tree, there is virtually no chance that it’s going to survive. And even if they do make it, if they have less than about 30 percent of their canopy, a lot of times beetles come in and kill the trees that are so stressed by the lack of foliage.”

Trees such as western oak or bay laurel, though, stand a better chance. “Most hardwoods in this environment, even down to toyon and coffeeberry and things like that, sprout from their roots readily because they’re sort of adapted to having their tops burned off,” Swain explains, again with the disclaimer that he’s talking about trees growing in western environments. So before cutting down trees, it is often best to take a wait and see approach. “If you have an oak that’s badly burned, for example, you want to wait until spring and see if it recovers or not. Because oaks can survive surprisingly severe amounts of fire. They’ll be blackened, there won’t be a leaf left on the tree, and then three months later when the rains come you’ll find that much of the tree, except for the ends of the twigs, will resprout.”

When this resprouting from the roots occurs after a fire, it may produce 15 or 20 sprouts; if the goal is to have a tree regrow in that space, the weaker sprouts can be selectively pruned out—but not immediately, Swain cautions: “If you prune them out to a single sprout right away, you’ve once again eliminated almost all of the tree’s canopy, further compromising the root system.” Instead, prune out the unwanted sprouts slowly, over several years, never removing more than about 30 percent of the canopy in any given year, he advises.

While it’s important to understand that many such trees are “fire-adapted,” meaning they have learned to survive — and even thrive — following natural fire events, it’s also critical to understand that when fires rip through residential areas, the environment is anything but natural. “When fire gets into a built environment, houses and cars with gasoline can burn for hours… fires can burn super intensively — maybe up to 3,000 degrees — for a long time. Even if nearby plants don’t burn themselves, they can essentially be boiled alive from the radiant heat,” Swain says. Clues to look for include trees that still have leaves attached, but with sap coming through splits in the bark and running down the trunks. “Different trees can die in different ways due to fire, and it can be difficult to figure out exactly what happened,” he says.

One thing you typically shouldn’t do after a fire is to fertilize trees in an effort to help them recover, Swain says. “Fertilization is generally discouraged,” he explains, noting that while fires wipe out a lot of carbon and nitrogen from the soil, many other nutrients are left behind. And supplemental water is only needed in the event that the weather following a fire is excessively dry, he adds. “The amount of water that the tree can use is directly related to the amount of canopy it has. If you add a lot of water to a tree that has virtually no canopy, you’re just begging to start a root rot problem if the weather turns warm.”

Given all of the devastation that fires leave behind, it’s important to remember all of the reasons why trees are so important, and why it’s worth the effort to save them when possible. In addition to the shade and aesthetic and many other “visible” benefits they offer, “trees, particularly on slopes, help to stabilize the soils,” Swain explains. Again, California has seen its share of landslides, which can be a particular concern following a fire, when the landscape has been wiped clean of trees and other substantial vegetation. “The survival of trees is critical in assessing what kind of erosion potential there may be,” Swain says. It’s the kind of thing that hydrologists and soil scientists are concerned about, but that homeowners might not always think of, he notes, so a tree care expert may need to explain the ramifications of removing versus trying to save trees on sloped properties.

Of course, if the weakened tree itself poses a hazard — maybe it’s beside a road or structure — it should be removed, adds Swain. “In those instances, you may decide that you want to leave the roots in place, because they’re still anchoring the soil,” he explains. In some cases, a hydrologist may need to be called in to assess the stability of the soil due to the loss of tree roots.

But unless a hazard exists (or a home needs to be rebuilt and it will be easier and cheaper to remove any questionable trees on the property before construction), it’s usually best to take a wait and see approach to fire-damaged trees, advises Swain. “Let the tree recover on its own, and tell you how it’s doing.”

This site uses Akismet to reduce spam. Learn how your comment data is processed.